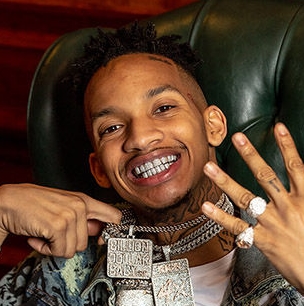 Stunna 4 Vegas as of 2022, has a net worth of 1.5 million dollars. His net worth is primarily the product of his rap career and YouTube.

How Did Stunna 4 Vegas Become Rich?

Khalick Antonio Caldwell, also known as Stunna 4 Vegas was born in 1996. His birth month is January and he was born in Salisbury, North Carolina. There is little to no information about his parents. Stunna has stated that his mother was the only parent figure in his life.

He grew up in North Carolina where he studied and went to school. During his senior year in school, Stunna started making music. He figured he would not be good in sports to have a career in it, despite being on the football team. This is why he started to gear towards music. Stunna has admitted that music never really got serious for him until he graduated high school. His rap name originated from his way of life he claims. Stunna 4 Vegas said that he has called himself Stunna but ‘4 Vegas’ came from more of a nickname about his way of life that he describes as risky and reckless.

Growing up, he was inspired by Southern rappers and that helped to shape the direction he took for his own music. Stunna 4 Vegas started his rap journey off with mixtapes; he released the first one in January 2017. It was titled ‘Boot Up’. This mixtape went on to be the first of a series.

The second mixtape he made had 9 tracks and was produced by Big Al and Regular Erick. Stunna 4 Vegas went on to release four mixtapes over two years. In 2018, Stunna 4 Vegas contacted a popular rapper named ‘Da Baby’ and asked for him to feature on a song of his. The rapper agreed and the two hit the studio. In September of that year, the song was released and grew in popularity very quickly. That track was the one to push Stunna 4 Vegas to the forefront of the music industry. It is also one of his most known songs to date.

Later on, in 2019, Stunna 4 Vegas decided to sign to the record label ‘Interscope Records’. Stunna released his debut album the same year. The album featured artists like Da Baby, Young Nudy, Lil Durk and NLE Choppa. Stunna’s album received positive feedback and appeared on the Billboard 200. Just a few months later Stunna was releasing singles with other big artists like Moneybagg Yo, Lil Yachty, and Offset.

In September of 2019 Stunna 4 Vegas had another feature on a Da Baby song which made it to Billboard 100. It peaked at number sixty-three and it was Stunna’s first record on the Hot 100.

Moving along in 2020 Stunna 4 Vegas released his second studio album. The name of this album was ‘Rich Youngin’ and it was released on January 17. The album received mixed reviews but debuted on Billboard 200. The following month Stunna 4 Life released his single ‘Go Stupid’. This song received much better feedback because it peaked on billboard 100 as number sixty. This was his first billboard 100 single as a leading artist. In November 2020, Stunna 4 Vegas released ‘Welcome to 4 Vegas’ which was his third studio album. Unfortunately, the album did not do well enough to chart on Billboard. More recently, Stunna has been in the studio making music like ‘4risk’, ‘What It Do’ and ‘No Dribble’ which has managed to chart at number ninety-two.

Despite the challenges in his career, Stunna says he will always make it because he is goal-oriented and will work hard to be able to provide for his family. He also states that he has one of the best mentors in the rap industry (DaBaby). Stunna has admitted to looking up to him as a big brother and not wanting to fail the people that believe in him. As for the future, Stunna 4 Vegas says we can expect him to continue to make great music that will make him more money.

Stunna 4 Vegas also has a popular YouTube channel. His channel has a subscriber count of over 7 million. In addition, he has multiple social media platforms like Instagram, Facebook, etc. that he stays active on and gains from whether it be income or publicity.

What Is Stunna 4 Vegas Net Worth?

Stunna’s net worth is a compilation of different avenues. He has a YouTube channel with millions of subscribers that make thousands of dollars monthly. He also has multiple sources to earn from his music like Soundcloud, Spotify and YouTube. Money from ticket sales for shows is a part of his net worth as well. His main source for his net worth however lies solely with his career as a rapper.

How Stunna 4 Vegas Spends His Money?

Stunna 4 Vegas has admitted to wasting money in the past and that he is no stranger to making big purchases. He has stated himself that early on in his career he has blown through 100,000 dollars unnecessarily. Stunna 4 Vegas has bought cars for all of his family members and himself. He also bought his mother a new house. He says that every now and then he treats himself to “a new toy”. These days Stunna claims he is trying to manage his money better and use it to invest instead of squandering it all. He told sources he is especially interested in Real Estate and that his next investment is somewhere in that vicinity. His biggest purchase to date was his mother’s house.