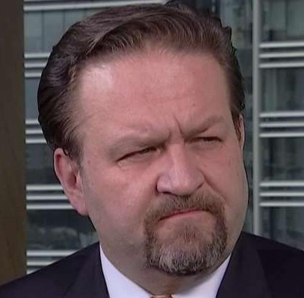 Sebastian Gorka also known as Dr. Sebastian is a former Deputy Assistant to the President, military and intelligence analyst, writer. He is a member of Republican party, podcaster and writer. In 2022 his net worth is $5 million.

How Did Sebastian Gorka Become Rich?

Sebastian Gorka was born on Oct 22, 1970 in London. His parents  Zsuzsa and Pál Gorka migrated to UK after unsuccessful Hungarian revolt against Soviet Union in 1956. They were naturalized in 1963.

Sebastian Gorka attended St Benedict’s School in London and later went to Heythrop College. He successfully graduated it with Bachelor of Arts degree in theology and philosophy.

While his time at university, Gorka volunteered into the British Territorial Army and served there for 3 years. His unit was 22 Intelligence Company of the Intelligence Corps. This company at a time was specializing in Russian language and supporting I Corps. It was disbanded in 1992 after the Soviet Union collapse.

Shortly before that Hungary became an independent country and Sebastian Gorka moved to his parent’s home country to serve in Hungarian Ministry of Defense. At the same time he was studying in Budapest University of Economic Sciences and Public Administration (now it’s Corvinus University of Budapest). Gorka received his second Bachelor of Arts degree in international relations and diplomacy in 1997. In 1998 he was an adviser to Hungarian Prime Minister Viktor Orbán.

After September 11 attacks, Sebastian Gorka has become a public figure in Hungary as he was often invited on TV to share his expert opinion on terrorism and counter terrorism. His career in Hungary was put to end by the fact that many believed he was a British spy, due to him previously serving in the British Territorial Army. Gorka denied this claim later, but it was clear that he has to look elsewhere for money and career opportunities.

Shortly after, in 2004 Gorka was invited to join the Program for Terrorism and Security Studies based in Garmisch-Partenkirchen, Germany. A few years later he and his family relocated to the US where he first got an administrative job in at the National Defense University in Fort McNair. In 2010 he started lecturing for the ASD(SO/LIC) program.

Sebastian Gorka become widely known in the US after he was appointed Deputy Assistant to the President Donald Trump in January 2017. He become part of the group known as the Strategic Initiatives Group. Unfortunately for Gorka, this time fate was not on his side again, as this was in Hungary 15 years before. He didn’t manage to get the so-called “security clearance” which is needed by anyone who has plans to work on national security issues in the USA.

After a few months of uncertainty, Gorka resigned from his position in the White House. Shortly thereafter he became a contributor to the Fox News, but as with his many ventures in the past, the cooperation ended in just 2 years.

At the same time Sebastian Gorka started to grow his own audience. He started his Twitter in March 2014, but growing his social accounts wasn’t a big thing for him in the past. Now it was the time to do it!

Now Sebastian Gorka has over 1 million followers on Twitter and 400,00 followers on Instagram. He’s hosting 2 podcasts: America First and The Gorka Reality Check. Previously Gorka also had a YouTube channel, but it got banned in April 2021 for copyright strikes and spreading misinformation regarding the 2020 presidential elections.

What Is Sebastian Gorka Net Worth?

Sebastian Gorka has a net worth of 5 million USD in 2022. His main source of income nowadays are podcasts, working as a spokesman for Relief Factor (fish oil supplement) and books he authored in the last years. These books are Defeating Jihad: The Winnable War (2016), Why We Fight: Defeating America’s Enemies – With No Apologies (2018) and The War For America’s Soul (2019).

Sebastian’s previous jobs also greatly contributed to his 5 million net worth. It is estimated that Sebastian Gorka yearly salary in 2008 – 2020 was about $80,000 and it increased every year.

How Sebastian Gorka Spends His Money?

Apart from spending on real estate, Sebastian Gorka spends money on his children and hobbies.