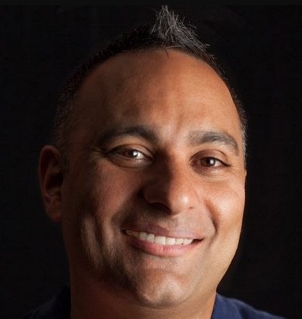 Russell Dominic Peters is a world-renowned comedian from Canada who has come a long way to make his name engraved in the entertainment industry. With his humor and wit, Peters’ style is characterized by satirical comedic routines tackling societal issues relevant to Indian culture, races, multiculturalism, and racism. The South-Asian descent comedian is considered as one of the most successful comedians at present having a tremendous net worth of $75 million as of 2022.

How Did Russell Peters Become Rich?

In 1965, Peters’ parents, Eric and Maureen, emigrated from Mumbai, India to Toronto, Canada. There, they gave birth to Peters on September 29, 1970. They stayed in Toronto until Peters was four years old then moved to the city of Brampton to settle.

However, Peters’ early childhood years in Brampton were rough since he had been subjected to bullying for his race and skin. He was often called “Paki” which, according to Oxford Dictionary, is used to offensively call people from South Asia. What made his situation harder was the fact that he has attention deficit disorder (ADD) or attention-deficit/hyperactivity disorder (ADHD). To counteract his ill-behaved classmates, he learned boxing as a way to defend himself. Unfortunately, he got kicked out after getting poor grades during his 10th grade. Eventually, Peters was still able to finish his high school in 1989 in Judith Nyman Secondary School which was previously known as North Peel High School because of the school’s inclusivity and support for students like Peters.

Fresh from high school, Peters started to explore the possibilities. He applied to Sheridan College but was rejected. This did not discourage him to pursue the school because he went to the school as DJ Russell who plays tracks on the campus radio station. Though he started as DJ, Peters also explored stand-up comedy this time. At the age of 19, he performed his first-ever comedic routine at Yuk Yuk’s Comedy Club.

Four years later, Peters was able to develop his skills in performing and was able to make money out of it. In 1992, he met his biggest inspiration who is George Carlin, a legendary American comedian in the past, who advised him to always take every chance to perform. The powerful words of Carlin made Peters more driven and passionate about performing even for little to no pay shows.

In 1995, Peters was able to make it on CBC TV by performing on the “Comics!”, a Canadian television series that weekly featured comedians around the country. His performance received heavy criticism for his provocative punchlines containing racist and sexual remarks and connotations, but this had also made his name famous which eventually brought a Gemini Award nomination for Peters.

After two years, Peters toured the United Kingdom and was given a chance to perform in “Comedy Now!“, a CTV stand-up series. He continued to make a name across the UK as he also became a host of BBC’s Network East Late in 2000 until 2002. In 2004, he came back to “Comedy Now!” to perform once again not knowing that this would be one of the biggest breakthroughs of his career. Peters’ name reached a lot of audiences when a YouTube video of his performance in “Comedy Now!” went viral all over the internet. The following years became years of sold-out performances across the US and UK.

In 2006, he performed at Beacon Theatre in New York City. There, he performed his first feature-length special entitled “Outsourced”. It turned out to be a huge success after becoming a back-to-back sold-out show. His performance was also aired on Comedy Central and was able to sell over a hundred thousand DVDs. The following year, he continued to bring laughter to his fans in Scotiabank Arena which was previously known as Air Canada Center as well as in New York’s Madison Square Garden. At the latter, he performed “Red, White, and Brown” and was able to sell another hundred thousand DVDs. All of his performances were impressively recorded sold out. In the following years, Peters had continuously built his momentum by appearing in some films and TV shows as an actor and host.

Peters’ career reached its peak in 2009 when he sold 16,000 tickets in his stand-up show in the UK at London’s O2 Arena. This was the largest audience for a comedy show ever recorded in London after Chris Rock. This brought him to Forbes’ top 10 highest-earning comics of 2009 after earning over $10 million. He appeared on the list for the next years as he continued to perform worldwide. He also made his name in Australia and Singapore when he performed to over 13,000 at Acer Arena in Sydney in 2010 and over 18,000 people at Indoor Stadium in Singapore in 2012. These years of stardom have brought Peters an estimated $15 million.

Because of these breakthrough performances and appearances on TV shows and movies, Peters reached third in Forbes list in 2013 after recording an earning of over $21 million. Though it fluctuated in 2015 after recording only $19 million, Peters already established his name in the entertainment industry not only as a comedian but also as an actor, host, writer, and producer as well.

What Is Russell Peters Net Worth?

Peters’ journey as a comedian was not easy but through passion and dedication, he was able to make a living out of it even having a net worth of around $75 million as of 2022.

A huge portion of his wealth is generated from comedy shows as his talent fee per show was said to be around $150,000 to $299,000. The rest of his income is coming from acting gigs from movies and TV series like “The Indian Detective” (2017) and “Russell Peters: Deported” (2020). He also earns as a book author and playwright and producer like “Саll Ме Ruѕѕеll” in 2010 and “A Russell Peters Christmas Special” in 2011.

Aside from being a celebrity, Peters also earns from buying and selling properties. For an instance, his mansion in Malibu gives me a monthly passive income of $20,000 as its leasing fee. He keeps on collecting properties and keeping them for quite some time as an investment for the future.

How Russell Peters Spends His Money?

When it comes to spending, Peters is known for his lavish houses and mansions across the United States; however, he considers these us more of an investment rather than long-term ownership.

In 2014, Peters bought a $4.75 million house in Malibu, California. What made this property special was the ocean view of the beautiful Malibu beach. Two years later, he listed this house with a tremendous $12 million selling price. Due to the high asking price, the property has not been sold even as of this writing. Peters toned down the price to $8 million but still has not found its new owner. Nonetheless, he made the property for lease which still earns generating at least $20,000 per month.

In 2017, he bought a $6.5 million worth mansion in Hidden Hill, California where celebrities like Jeffree Star and Paul George also live. The 1.5-acre mansion features a 14-seat theater, 20-car garage, wet bar, and billiard room. He then listed his home in June 2020 for $8.5 million but was only able to sell it for $7.8 million in October 2020.

Peters also owns several properties in Nevada and California. In Las Vegas, he was said to own a 4,000 square-foot home, and in Encino, he was reported to own a $5.6 million worth of mansion.

Outside the United States, Peters owns a $5.4 million worth of mansion in Toronto. The 9,500 square-foot residence in his hometown is said to be specifically located in Etobicoke and was bought in 2019.