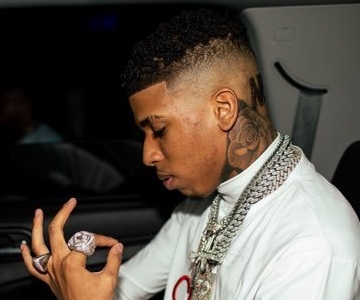 This young American rapper known as NLE Choppa (real name is Bryson Lashun Potts) is already established a fortune of over 1 million USD rapping and releasing his music videos on YouTube. Here we uncover how he became a millionaire at such young age and how he spends his money.

How Did NLE Choppa Become Rich?

Bryson Lashun Potts was born in Memphis, Tennessee and attended Cordova High School. At the age of 14 he started rapping and on March 18, 2018 he released his first song called ‘No Love Anthem’ being only 15 years old. A few month later he released his second work ‘No Love the Takeover’, but real fame came to him on January 17, 2019. That day NLE Choppa uploaded his third single ‘Shotta Flow’ which instantly became a hit: 10 million views in the first month (today it has over 160 million, his second most-viewed music video on YouTube) and place 14 on the US RB/Hip-Hop chart.

After this stunning success, Bryson Lashun Potts continued to grow his audience and release new songs. In February of 2019 he released a sequel to his hit called ‘Shotta Flow 2‘ which was even more successful (over 20 million views over a month!). This release brought attention of different labels trying to get the young star under their roof. Among them were Republic Records, Caroline and Interscope Records. There were rumors that top bidding for the young rapper reached almost 3 million USD!

But NLE Choppa turned all of them down signing a contract with the UnitedMasters. This contract allowed him to keep his recordings and publishing rights.

In the following months he released a few more singles including ‘Capo‘, ‘Blocc Is Hot‘, ‘Free YoungBoy‘, ‘Camelot‘ and ‘Shotta Flow 3‘ which remains as one of his most viewed song on YouTube (over 80 million views).

His first album called ‘Top Shotta‘ was set to release in early 2020, but was postponed to August of that same year due to the Covid-19 pandemic. The rapper was included in 2020’s XXL Freshman Class. For those unaware, XXL is a popular American hip-hop magazine founded in 1997 and Freshman Class is an annual list of most promising ten artists each year. Featuring in such list gives an immense career boost for anyone who wants to become a real hip-hop star.

He continued to release new songs in 2021 and will continue to do so in the following years. His last ones ‘Letter To My Daughter‘, ‘First Day Out‘, ‘Final Warning‘ received million of views after their initial release and the rapper will produce even more (there are talks about his second studio album) in the upcoming years.

Apart from rapping, NLE Choppa got involved into wellness niche. He’s been selling his products on his website nlehealthandwellness.com for quite some time, increasing his wealth using his publicity.

What Is NLE Choppa Net Worth?

NLE Choppa get sizeable amount of money from selling his merch at his official store nlechoppa.com, but his main source of income are concerts and album sales.

NLE Choppa 3 million net worth includes his cash in the bank account. If we count all his movable and immovable properties it may rise up to four million USD.

How NLE Choppa Spends His Money?

NLE Choppa expenditures are not that known. But we know for sure that he owns a big house which he bought it in 2020 as a present for his birthday. The house located in Memphis, Tennessee. He also bought a Rolls Royce in 2021. You can take a look at them in one of his many streams he does for his YouTube channel NLE CHOPPA.